Basal Cell Carcinoma at Age 16 – Teen Warns: “Skin Cancer Can Happen to Anybody.” Basal cell carcinoma (BCC) is the most common skin cancer, yet extremely rare in children and teens. But it can happen, as Laura Anne Page discovered when she was just 16 years old.

In November 2020, Laura Anne was living her best life. She enjoyed high school, going out to eat with friends and family, singing in the chorus and being on the soccer team. The thought of skin cancer never crossed her mind.

Fortunately, Laura Anne is both observant and inquisitive. So, when she noticed a changing mole on her abdomen, she monitored it closely. “I had this mole for as long as I can remember. Then it gradually grew bigger and got darker,” she explained. “I knew that changes in a mole were not normal, so I got worried.”

Laura Anne and her mother, Amanda, went to a dermatologist right away. To their surprise, the doctor was far more concerned about a different spot – a smaller mole on Laura Anne’s chest.

“The one she biopsied started as a little freckle, then got darker and a bit raised,” Laura Anne explained. “To me, it didn’t look cancerous.”

Nine days later, while visiting her grandmom, Laura Anne got the alarming news. “My mom called and asked to speak with grandmom. Then I overheard the word ‘cancer’ and I just knew,” she recalled. “So, we just stood there crying for a while. Then I stopped crying and ate some chicken nuggets. And then I went and aced my physics test.” A message from Laura Anne

If you had told me two years ago, I would find out I had skin cancer at 16 years old, I would not have believed you. Now here I am, 18 years old and honored to share my story with you. 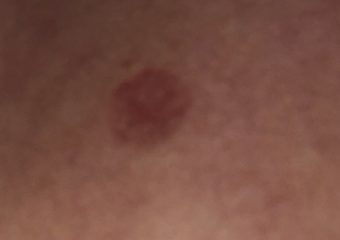 “I wanted to know everything about basal cell carcinoma,” she said. “I was glad that I looked it up because it made me a little less scared. It also helped me be more aware of what would happen during my surgery.”

Laura Anne was relieved to learn that when a BCC is identified and treated early, it is highly curable. She was happy that she paid attention to changes in her skin, spoke up quickly and sought the expertise of a dermatologist.

Laura Anne also discovered that although BCCs are quite rare in teens, she had risk factors for developing the disease. BCCs are most often seen in patients with light skin types like hers. She also lives in the southern U.S., where UV rays are stronger. And while Laura Anne does not sunbathe and has never used a tanning bed, she has had UV exposure, including a couple of sunburns.

Laura Anne’s close relatives – her grandfathers and her mom, Amanda – have had skin cancer, which is another risk factor. In fact, a year after her surgery, Laura Anne noticed a new spot on Amanda’s nose, and urged her to get checked. The spot turned out to be a BCC. Laura Anne with her family. Her mother Amanda (left) has also been diagnosed with BCC.

In January 2021, Laura Anne had surgery to remove the skin cancer. For small, early BCCs like Laura Anne’s, excisional surgery is usually the only treatment needed.

Her surgeon was surprised that Laura Anne developed BCC at such an early age, since nonmelanoma skin cancers commonly occur in older adults with years of cumulative UV exposure. He suspects that a combination of light skin type, sun exposure and hereditary factors likely contributed to her BCC.

“Laura Anne is one of the youngest patients I’ve treated for skin cancer,” said Mario V. Mitkov, MD. “And while basal cell carcinoma is a common skin cancer, it presented at an early age, in an uncommon way. It looked like a mole. We will continue to screen her regularly.”

After her surgery, Laura Anne suffered some discomfort for a couple of weeks; she was unable to lift anything and needed help carrying her books. Today, there is a scar where her BCC used to be, a reminder to always protect against skin cancer.

Since her diagnosis, Laura Anne has made sun protection a habit, using sunscreen, covering up with clothing and wearing a hat and sunglasses when outside.

Laura Anne’s new passion is to spread awareness about skin cancer and the importance of prevention and early detection. “I began posting on Instagram and Facebook. People were very supportive,” she said.  “One of my friends told me that because of my stories, she has been wearing sunscreen more often.”

Today, Laura Anne is one of The Skin Cancer Foundation’s Healthy Skin Champions, sharing her experience and resharing our skin cancer content on social media. She wants to warn teens about the dangers of skin cancer.

“I want everyone to know that just because it’s rare, doesn’t mean that you can’t get it,” she said. “When I see TikToks about girls going tanning, even joking about how they might possibly get skin cancer in 10 years, I know that it could happen to them way sooner. Anyone can get skin cancer, even teenagers.”