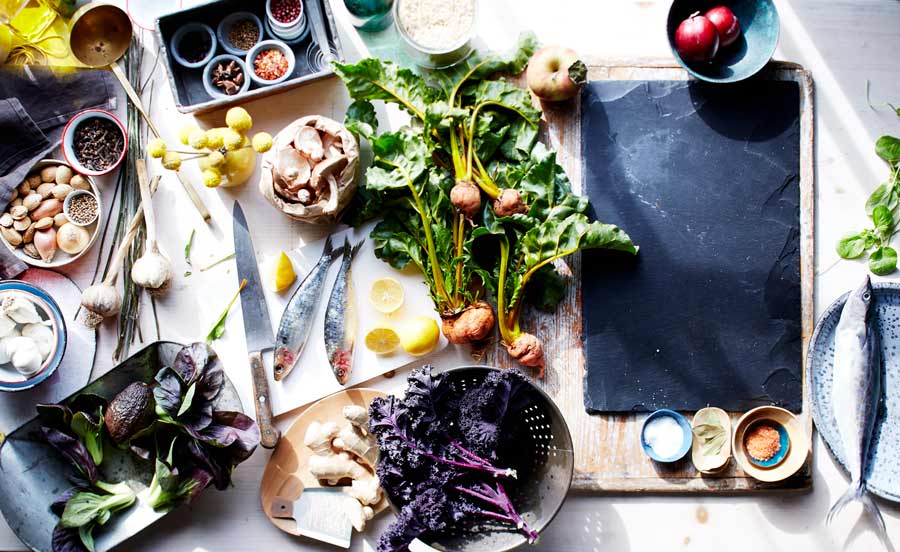 You see your dermatologist twice a year for a full-body skin exam. You wear a wide-brimmed hat and sunglasses outside and stay under an umbrella at the beach or pool. You always use a broad-spectrum SPF 15 or higher sunscreen outdoors and reapply it at least every two hours. You avoid tanning beds like the plague.

After all those precautions, is there anything more you can do to avoid skin cancer? You may think the answer is no. However, one other key strategy you can use is simply to eat as healthy as you can.

Nonmelanoma skin cancers (NMSC), including basal cell and squamous cell carcinoma (BCC and SCC), are the most common cancers in America. Some 5.4 million cases of NMSC are treated in more than 3 million people every year, but recent research shows that certain dietary changes may be one way to bring those numbers down.

The major cause of skin cancer is ultraviolet (UV) rays from the sun or from tanning machines. About 90 percent of nonmelanoma skin cancers and 86 percent of melanomas are associated with solar UV, and more than 419,000 cases of skin cancer in the U.S. each year are linked to indoor tanning.

UV exposure wreaks a lot of its havoc on the skin by generating free radicals, unstable, nasty little oxygen molecules that produce inflammation and damage cell function and your skin’s DNA. This DNA damage can cause changes in your genes called mutations that lead to skin cancer.

Studies have shown that substances called antioxidants, including vitamins and other nutrients, may help fight off free radicals and prevent the damage they do that can cause skin cancer. A 2002 study in the Journal of Investigative Dermatology found that UV exposure greases the wheels for skin damage partly by depleting antioxidants in the body. So, it makes sense that replacing these protective substances could bolster the weakened defenses.

After years of debate about whether antioxidants could indeed spell the difference between someone developing or not developing skin cancer, recent research has tipped the scales in their favor. More dermatologists than ever now advise patients to feast on foods high in these nutrients. Many also suggest applying topical products containing them, including sunscreens.

While both foods and supplements can aid in disease prevention, most nutritionists stress foods, since the interaction between different nutrients in foods is what makes them most effective. Taking individual vitamin supplements may not work the same way, and high doses of them may be toxic. Vitamins C, E and A, zinc, selenium, beta carotene (carotenoids), omega-3 fatty acids, lycopene and polyphenols are among the antioxidants many dermatologists recommend including in your diet to help prevent skin cancer. You can find them in many everyday nourishing whole foods. Diets high in beta carotene-rich fruits and vegetables, such as carrots, may reduce the risk of some cancers. Beta carotene also boosts the immune system’s ability to fight disease.

Get Your Antioxidants Here!

While virtually all experts agree that eating foods rich in these compounds is good for your overall health, the evidence that they specifically help prevent skin cancer is stronger for some nutrients than others. The good news, though, is that they also protect against other cancers and conditions ranging from diabetes to heart disease. So dig in!

Supplements That May Help

Though in most instances nutritionists prefer you get your nutrients from foods rather than supplements, two antioxidant supplements have recently produced impressive evidence as skin cancer fighters.

Nicotinamide (also known as niacinamide) is a form of vitamin B3. Several studies by Diona Damian, MD, and colleagues in Australia have catapulted nicotinamide into the public consciousness, sparking a run on vitamin supplement shelves. Her studies have revealed that nicotinamide reduces the rate of new skin precancers, basal cell carcinomas and squamous cell carcinomas by 23 percent in patients with a history of these lesions. She has also done early research suggesting that nicotinamide may provide similar benefits to melanoma patients.

When UV damages the skin, DNA repair enzymes in the skin launch into repairing the damage, but never succeed in fixing all of it. The remaining damage can lead to skin aging and skin cancers. However, both oral and topical nicotinamide replenish energy supplies in the skin that get depleted by these repairs. In this way, they bolster the immune system’s ability to fix the damage. Also, UV radiation itself suppresses the immune system, and nicotinamide reduces this suppression.

However, Dr. Damian sounds a note of caution: “So far, there is no evidence for the efficacy or appropriateness of oral nicotinamide in the broader population,” she says. But for high-risk patients, she notes, such as those who have had multiple skin cancers or people who have very suppressed immune systems, such as transplant recipients, “They are a new opportunity for skin cancer prevention.” Whether in multivitamin combinations or as solo supplements, she says, they are “safe, affordable and widely available.”

While the research has only used supplements, nicotinamide is also naturally present in small quantities in yeast, lean meats, fish, nuts and legumes. (It is now also incorporated in many topical agents including sunscreens and cosmetic products.)

Polypodium leucotomos: This antioxidant, which comes from a fern, is the key ingredient in several products, and perhaps the most prominent example of so-called “edible sunscreens” on the market today. Studies have shown that it helps prevent both UVA- and UVB-induced toxicity and DNA damage and reduces free radicals, those potentially cancer-causing oxygen molecules caused by UV exposure. A recent study showed that 240 mg of the supplement twice daily suppressed sunburn, and it has been found to extend the time outdoors before your skin starts to tan. It is also an anti-inflammatory, and increases a molecule known to suppress tumors. Furthermore, convincing research shows that it works against a UV-sensitivity disorder called polymorphous light eruption and the UV-induced pigment disorder melasma. In Central and South America, it is used in traditional medicine.

Last word: It’s important to remember that while these antioxidant supplements may enhance the effects of your sunscreen and other forms of sun protection, they can’t replace them. Any “edible sunscreen” product that promises complete protection (or an SPF over 15, the minimum adequate SPF) is selling you a bill of goods. The main thing is to keep your skin shielded from direct sunlight by seeking shade outdoors and wearing wide-brimmed hats, UV-filtering sunglasses and other sun-protective clothing along with sunscreen.

The More the Merrier

Just as nutrients provide more benefits when combined naturally in foods, foods offer more benefits when combined with other foods. The more varied and colorful the array of foods you eat, the more weapons you amass in your anticancer army. Hearty, nutritious, multifaceted meals can help your body fend off damage and disease with waves of powerful antioxidants, immune boosters and anti-inflammatories.

One great power regimen combining a wealth of anticancer nutrients is the famed Mediterranean diet, a plant-based diet rich in active, potent antioxidants and anti-inflammatories. A mélange of the traditional diets of people living around the Mediterranean, it features nutritionally rich foods such as cruciferous and green leafy vegetables, tomatoes, citrus fruit, fresh herbs, fish high in omega-3 fatty acids, wine and olive oil. In a study of more than 600 people in Italy, those sticking with the diet cut their melanoma incidence in half compared with those not on the diet.

So, now that you’ve seen what these super nutrients and power foods can do, it’s up to you to incorporate them into your daily diet. That shouldn’t be a chore, since they are as delicious as they are nutritious. The road to health and well-being starts with your taste buds!

Deborah S. Sarnoff, MD, is a clinical professor of dermatology in the Ronald O. Perelman Department of Dermatology at NYU School of Medicine in New York City. Cofounder and codirector of Cosmetique, a private practice in Manhattan and Long Island, Dr. Sarnoff is also president of The Skin Cancer Foundation and co-editor-in-chief of Journal of Drugs in Dermatology.

Danielle Gerome, an undergraduate at Binghamton University, State University of New York, is studying integrative neuroscience and is scheduled to graduate in 2017.

*This article was first published in the 2017 issue of The Skin Cancer Foundation Journal.