I Had Melanoma at 25 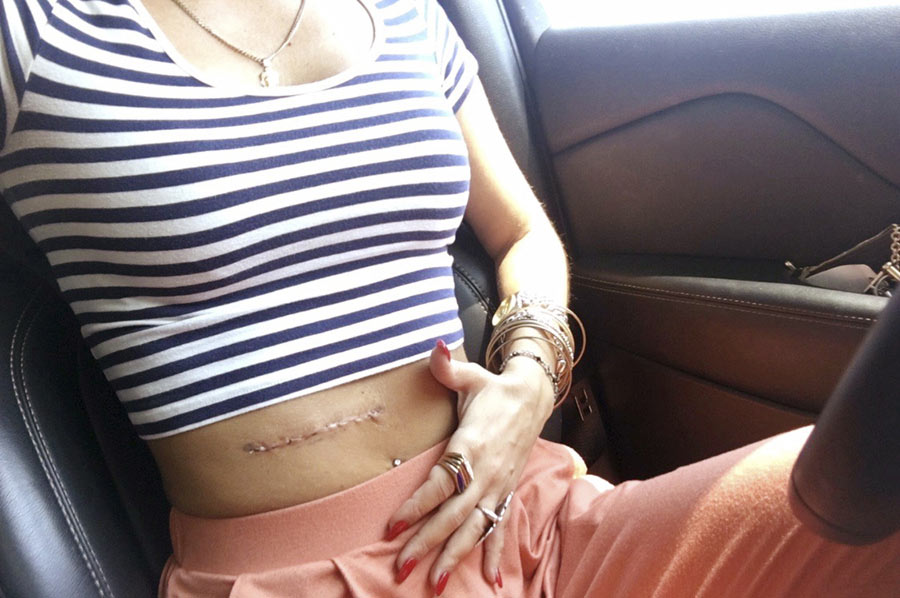 After I moved to Manhasset, Long Island, when I was in middle school, I started using tanning beds. I was captain of the cheerleading team, and I just enjoyed being tan. Everyone was going to the tanning salon 10 years ago, especially before events like the prom. There was a place just down the block, and it was a very common thing to do.

I always had moles on my body, and I learned that we had a family risk of skin cancer, on both sides. My grandfather was diagnosed with a melanoma on his face when I was 22, and that scared me. I started having skin exams with a dermatologist myself. I even had a few biopsies, and I learned about what to look for in skin cancer.

When I saw a spot on my right abdomen in the summer of 2016, when I was 25, I noticed that it was growing. I know what my moles look like, and this one seemed to be getting bigger and bigger. It just looked funny to me, different from the others. Then, when I scratched it one day, it bled. I remembered that’s what had happened to my grandpa. I said, “This isn’t right” and made an appointment with dermatologist Deborah S. Sarnoff, MD, since she had handled my grandfather’s case.

After getting the results of a biopsy, Dr. Sarnoff called us in: me, my dad and my mom, to tell us it was a malignant melanoma. And it was thick enough to cause some concern that it might have gone into my lymph nodes. She sent me to a surgical oncologist at NYU Langone Medical Center, who removed the tumor and a lymph node under my right arm. Lucky for me, there was no cancer detected in the lymph node. Dr. Sarnoff said I had saved my own life by coming in, and if I’d waited any longer, it would have been much worse. Now I go for follow-ups every three months. They have me on high alert! I know they’re looking out for me. I realize how important it is to stay on top of it because I wouldn’t want to go through that again! Elli deeply tanned on a visit to Greece, and proudly pale today.

I shared on my Instagram, “Probably one of the scariest sit-down conversations you can have with your doctor. Scary for you, scary for your family. I am a big advocate for early detection. Black, white, Asian, MEDITERRANEAN… it can happen to any one of us. No one is as safe or protected as we thought. The sun is strong; we’ve depleted the Earth’s ozone layers. Melanoma can spread to your lymph nodes in less than six weeks. If I’d waited, this could have happened to me. It’s simple: Use sunscreen. Don’t go into tanning beds. Be aware of your family’s history. Visit a dermatologist. Save your own life.”

My scar is pretty big. (Yes, that’s me in the photo at the top.) At first it was kind of upsetting to look at. But now it’s a part of me. I don’t mind it. My genetics probably played a role, but studies show that even one time in a tanning bed elevates your risk of melanoma. So now I just want to tell young women who feel like they don’t look good without being tan, just be comfortable in your own skin, literally. Just be your natural self.

*All photos courtesy of Elli Karagiannis