Skin cancers don’t all look alike. You can study the warning signs for the three most common types, basal cell carcinoma, squamous cell carcinoma and melanoma, on The Skin Cancer Foundation website. But occasionally a skin cancer develops that may seem like it’s something else that’s not a big deal. Early detection of skin cancer can save your skin and, in some cases, even your life. Watch for these clues, and if you see something new, changing or unusual, like something doesn’t heal, is growing or just doesn’t seem right, see a dermatologist right away. You might think that a dark line under your fingernail is just a bruise, but it could be a sign of melanoma. Called subungual melanoma, it’s very rare — accounting for about 3.5 percent of all melanoma cases — and it is potentially deadly. It is more common in people of color.

It starts as a brown or black streak under a fingernail or a toenail, but often increases in size. It can cause the nail to separate from the nail bed, and lead to a darkening of the skin near the nail. Dark lines under fingernails that are caused by melanoma tend to be thicker than the harmless splinter-width lines that people get from injuries or heredity, and they tend to worsen. If you have a line under your nails not caused by trauma, such as closing the door on your fingers, see a dermatologist for an evaluation. You might think you have severely chapped lips, but that could be a warning sign of actinic cheilitis. This precancerous condition typically appears on the lower lip as scaly patches or roughness. Left untreated, it can evolve into squamous cell carcinoma (SCC). You might think you’ve developed a wart, but these funnel-shaped growths that look like a tiny horn on the skin may signal a precancerous condition called actinic keratosis (AK) that can contain SCC at its base. You might think you have a patch of dry skin. But if the patch doesn’t heal, looks scaly, red or crusty and starts spreading outward, it could be a superficial type of squamous cell carcinoma (also called SCC in situ). 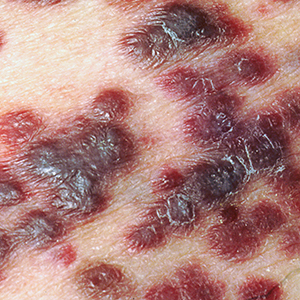 You might think you have a severe rash or allergic reaction. This rare, aggressive cancer tends to affect people with weakened immune systems, such as those with the HIV virus. It causes red or purple patches to grow in the skin. While this is becoming more rare thanks to antiviral medications, if you think you might be at risk, see your doctor promptly. Photo credit: ALAMY